It was an overcast Saturday afternoon and, aside from the casual gust of soft breeze, all was still. I was hiking higher up the mountain, aided with the support of a crudely-shaped walking stick. As I went on, I tried to use the moment I had apart from the group to do some cleanup in my head. Much was on my mind. Aside from the occasional thoughts that pass through one’s head on any given day, my mind wandered from how I was missing swim practice that weekend, to my aching feet, then onto the steaks awaiting my eager stomach at the house. This continued for some time. As I look back on the moment, it is interesting to see how much “me” was in the equation. I tried to move my focus to God and away from myself, but it seemed that nothing was doing the trick. Then I began to pray. I simply told Him “thank you” and gave Him praise. But even then, it seemed that it wasn’t enough.

It had been roughly five miles since I set out from the base of the mountain, and the going was getting tough. The hill inclined sharply and my feet seemed to be giving in, not to mention the increased pressure on my injured knees. I was getting tired. I didn’t want to stop, for I wanted to see how high this trail would go. As I pushed forward, I began to realize that the seemingly never-ending rows of trees were lessening. Sky was in the distance… I was nearing the top. I climbed faster up the slope, and the ground under my feet began to level. It was a good feeling. Then the trees opened out into a field. And as I stepped forward, I felt a soft breeze flow over my face. I looked around. There were trees surrounding the field, except for a small gap about a hundred feet in front of me. Through this break in the trees, I could see mountain after mountain. The rows appeared to extend for miles. The scenery was beautiful.

It was then that I felt His presence. I think it was almost as if God was telling me, “just look at how great I am. Cast all your thoughts aside and look at me… trust in me, love me, live like you love me. I created all of this with the words of my mouth; I spoke and everything came to be…” At this I couldn't help but fall on my knees and worship the only One worthy of any praise.

Many times, I think it is exceedingly easy to fall into a rut… a rut of only going through the motions and not actually living life out as if we really are children of God. Often times, we get so caught up in ourselves and all that is going on around us that we lose sight of our true purpose in life. God calls us to be fishers of men, a city on a hill, a lamp on a stand… He calls us to be imitators of Him, to not be the lukewarm Christian testing out the waters; but rather, He wants us to be a glowing ball of fire for Him. He wants us to be all in; anything less is dishonorable to His greatness and majesty.

“For in him all things were created: things in heaven and on earth, visible and invisible, whether thrones or powers or rulers or authorities; all things have been created through him and for him.” [Col. 1:16]

Caleb is a motion media student at Savannah College of Art and design. Visit his blog below. 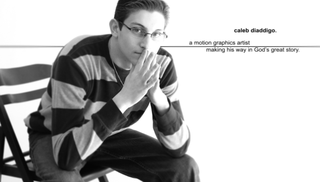 View all posts by bluebirduncaged